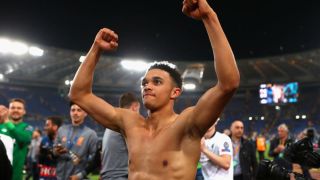 Liverpool defender Trent Alexander-Arnold says he has been living the dream this season and is keen to nail down a Champions League final starting spot.

The 19-year-old had played only 12 first-team matches prior to this campaign, but has established himself as a key man for Jurgen Klopp, particularly in Europe.

Alexander-Arnold, who collected Liverpool's Young Player of the Season award this week, has made 11 appearances and scored twice in the Champions League - including qualifiers - and now hopes to start against Real Madrid in the final in Kiev on May 26, which is more likely following Joe Gomez's ankle injury.

"[This is] a dream come true," he told Liverpool's official website. "There's something special about the Champions League and it's always been a dream to play in that competition.

Alexander-Arnold has been tipped for an England call-up and trained with Gareth Southgate's side in recent months, but insists he is still learning at Liverpool.

"It's an honour every time I get the chance to go out on to the pitch, whether it be starting or as a sub, so I'm just happy to get on the pitch whenever I can," he said.

"Hopefully there will be many more appearances to come.