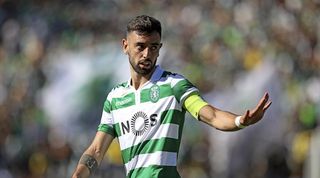 Tottenham have agreed personal terms with Sporting CP's Bruno Fernandes, according to reports in Portugal.

Journalist Goncalo Lopes has revealed that the midfielder and his agent have accepted Tottenham's contract offer ahead of a potential move.

However, Spurs are yet to agree a transfer fee with Sporting, who are thought to value the 24-year-old at around £64m.

Tottenham's latest offer was for £46m plus £9m in potential add-ons.

Fernandes told his employers last week that he would rather join Tottenham than Manchester United, who have also been keeping tabs on him this summer.

And while the north Londoners have moved a step closer to completing a deal, they must now submit an acceptable offer to Sporting before the English transfer window closes on Thursday.

Fernandes scored 31 goals in all competitions during an impressive 2018/19 in Portugal.