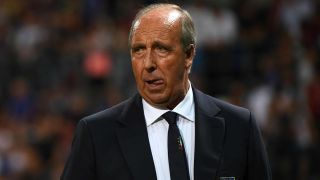 Italy goalkeeper Gianluigi Buffon has hit back at critics of head coach Gian Piero Ventura in the wake of Saturday's World Cup qualifying draw with Macedonia.

Pressure on the 69-year-old's position has increased following his side's poor performance in the 1-1 result in Turin, with an automatic spot in the finals in Russia next year now out of their reach.

Ventura has been criticised for persisting with a 4-2-4 system that some have claimed is ill-suited to the players, especially after their 3-0 defeat to Spain last month.

Buffon, however, says it has become "popular" to focus criticism on the coach and insists he will do everything it takes to ensure Italy progress through a play-off tie next month and reach the World Cup finals.

"Recently, the most popular sport is to attack Ventura and I don't find that appropriate," the Juventus veteran told Corriere dello Sport.

"It would have been better had we won, but not much would have changed with how the match was interpreted.

"That wasn't the best expression of our team. We got frightened in the second half and I don't know why, given that they played the same way. If they created problems for us, it was our fault.

"I have to bring Italy to the World Cup and I'll do everything I can to make it happen."

Italy face Albania on Monday in a match that will conclude their Group G campaign.