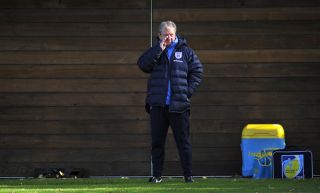 Addressing the media ahead of Friday's crucial home game against Montenegro, Hodgson claimed that his squad had "never discussed" the possibility of failing to reach Brazil.

England hold a one-point lead at the top of Group H and can guarantee their progression by beating Montenegro and Poland at Wembley.

"I know they (the players) will deliver and I'm convinced tomorrow night you'll see a very good England team."

It remains to be seen whether Hodgson will opt to start three forwards against Montenegro, with Wayne Rooney, the in-form Daniel Sturridge and Danny Welbeck providing his main options.

Asked if an attacking approach can be expected, he replied: "We look at all our options. The important thing is to make sure we attack very well but it will be a more difficult task for us if we adopt a gung-ho approach and find ourselves one goal down.

"I'm confident the team I've got will strike the right balance between attacking and defending, and cause Montenegro problems."

Captain Steven Gerrard is set to draw level with Bobby Charlton's mark of 106 caps on Friday, which would put him joint fourth in England's all-time list.

"I'm very proud – he (Charlton) is one of the best players to ever play for England so, to equal his record, I'm very flattered and honoured," said Gerrard.

Pressed on the significance of the Montenegro fixture, the Liverpool midfielder added: "It's up there with the most important games I've played for England and it's up to myself and the players to deliver."