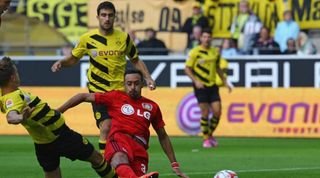 Schmidt could not have wished for a better start to his first Bundesliga game in charge, having joined from Red Bull Salzburg during the close-season and, after taking the early lead, Leverkusen rarely looked like dropping points against last season's runners-up.

Dortmund's lacklustre display was compounded by a lack of fluency in the final third, as Jurgen Klopp's men struggled immensely to craft clear goal-scoring chances.

Entering his seventh season in charge of Dortmund, Klopp had been hoping to celebrate becoming the club's longest-serving coach with a victory and they enjoyed significant late pressure.

But Leverkusen added a second through Kiessling in stoppage time to wrap up a comfortable triumph for the away side.

Klopp spoke highly of Leverkusen in the build-up to the fixture, believing them to be stronger than last season under Schmidt and they went some way to proving him right by taking the lead in record-breaking fashion.

Bellarabi latched on to the ball on the edge of the area and, after poking the ball through Matthias Ginter's legs, fired a shot under Mitchell Langerak - all without a Dortmund player getting a touch on the ball.

The hosts left themselves open at the back as they searched an immediate response and Leverkusen playmaker Hakan Calhanoglu twice looked to capitalise, but he could not work Langerak with two long-range efforts.

Dortmund's incoherence in attack continued to play into the hands of their visitors, who could have doubled their lead in the 33rd minute.

Kiessling did well to knock a looping cross down for Sebastian Boenisch, but the left-back dragged his effort well wide.

Leverkusen continued to impress early in the second period and Bellarabi caused problems again in the 48th minute as his low cross was almost deflected past Langerak.

However, Dortmund grew in confidence as the match entered the final half-hour and a clever move inside the area nearly presented the hosts with a chance, but Pierre-Emerick Aubameyang was unable meet Ciro Immobile's cut-back.

The hosts dominated possession in the final stages and they went close to restoring parity, but found Bernd Leno in inspired form.

Ginter met a looping corner with his head, only for Leno to powerfully palm clear before the Germany international denied Aubameyang after a quick free-kick.

And Kiessling put the result beyond doubt after Bellarabi robbed Erik Durm and squared to secure a fine victory in Schmidt's Bundesliga bow, while Klopp's men begin the campaign in unconvincing fashion and their attempts to keep pace with Bayern Munich already look under threat.