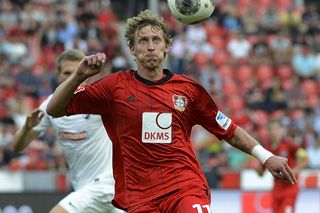 Pep Guardiola's side strengthened their grip on top spot in the German top flight with an impressive 3-0 win at Borussia Dortmund last weekend.

The Bavarian giants are now four points clear of Bayer Leverkusen at the summit, and they will be looking to make it six consecutive Bundesliga wins when the bottom-of-the-table Braunschweig visit the Allianz Arena.

Bayern's record-breaking unbeaten run now stands at 38 Bundesliga games, while Torsten Lieberknecht's Braunschweig have won just twice in their first season back in the top flight for 28 years.

Leverkusen also host a struggling side on Saturday in the form of Nurnberg, who are still yet to win a league game this season.

Gertjan Verbeek's side, who sit second bottom, have drawn eight of their 13 league matches this season and will be the underdogs at the BayArena.

Leverkusen have made their best-ever start to a league season with 10 wins from 13 attempts, with striker Stefan Kiessling again enjoying a strong campaign.

Kiessling, who was last term's Bundesliga top-scorer with 25, has netted eight times in the league so far this season.

Winger Sidney Sam is likely to miss the match with a thigh injury for Leverkusen, though.

Meanwhile, Dortmund, who dropped seven points behind Bayern after Saturday's defeat, will aim to bounce back at Mainz.

Dortmund had lost their last three in all competitions before a morale-boosting 3-1 win over Napoli in the UEFA Champions League on Tuesday and they will now be looking to build.

Borussia Monchengladbach have won their last four league matches and will fancy their chances of extending that run against relegation-threatened Freiburg at home on Sunday, while Hannover - who have slipped to 13th in the Bundesliga following a winless run of seven league matches - have a good chance to bounce back against fellow strugglers Eintracht Frankfurt, who are 15th.

Elsewhere, Wolfsburg will look to extend their five-match unbeaten streak when they host Hamburg on Friday.