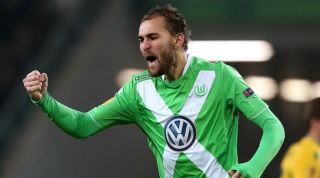 Dost scored both goals in a 2-0 UEFA Europa League win over Sporting Lisbon on Thursday, after helping himself to four games in a sensational 5-4 win at Bayer Leverkusen last weekend, and Hertha were the latest team to suffer at the hands of the former Heerenveen man.

The clinical Dost needed only 10 minutes to open the scoring, pouncing from close range after Andre Schurrle had set him up.

Second-bottom Hertha are in desperate need of points as they battle to avoid the drop and they were level when Justin Schieber scored his first goal in six games on the half-hour mark.

Wolfsburg were not to be denied victory, though, as Dost was on hand to scored his ninth goal in his last four games - and 12th in his last seven - after Luiz Gustavo's strike rattled the post.

Victory for Dieter Hecking's side ensured they are eight points behind leaders Bayern Munich and 10 clear of third-placed Borussia Monchengladbach, who could only draw 1-1 at struggling Hamburg.

Hamburg were hammered 8-0 at Bayern last weekend and their chances of pulling off a surprise win on Sunday were not helped when Ivica Olic was withdrawn due to injury after only 25 minutes.

Patrick Herrmann almost put Gladbach in front with a volley that rattled the post and Lucien Favre's men looked to be heading for defeat when Zoltan Stieber put the home side in front 17 minutes from time.

Hamburg were unable to hold on for three precious points, though, as substitute Branimir Hrgota headed home a corner two minutes into stoppage time to salvage a point.