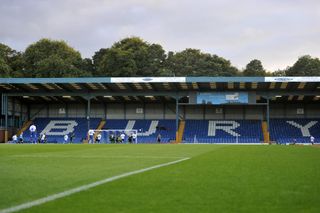 Bury’s opening Sky Bet League One match against MK Dons has been suspended after failing to satisfy the English Football League that the club have the necessary finances in place.

And the Shakers’ second fixture, away at Accrington Stanley the following Saturday, is already under threat if suitable proof cannot be produced by noon on Friday.

However, Bolton’s League One match against Wycombe Wanderers will go ahead on Saturday after the EFL declared itself satisfied about their financial position.

Both clubs had been given until 5pm on Monday to provide the necessary information to show they had the finances to be able to fulfil league requirements.

An EFL statement read: “Following continued and comprehensive discussions with the ownership at Bury and other interested parties throughout Monday, the EFL board is not satisfied it has received the necessary evidence in regard to the outstanding information it requires that demonstrates how the club will be funded moving forwards.

“As a result of not meeting Monday’s 5pm deadline, which had been extended on two previous occasions, the EFL board feels it has been placed in an unenviable position and, regrettably, has opted to take the reluctant decision to suspend Saturday’s opening day fixture with MK Dons under the provision of EFL Regulation 28.2.

“In addition, the EFL board, if not in possession of the necessary evidence by 12pm on Friday 2 August 2019, will make a determination as to whether to suspend Bury’s away fixture at Accrington Stanley on Saturday 10 August 2019.”

The EFL insist they are continuing to support Bury but, ultimately the club bought for £1 by Steve Dale in December have to come up with the required paperwork.

“As has been the case throughout this entire process, the EFL will continue to offer its full assistance to the ownership at Bury, but remains clear that while the league is here to support the club through some extremely complex and complicated issues, the outstanding matters can only be resolved with the cooperation from the club itself,” added the statement.

Bolton, who are awaiting completion of a takeover by the Football Ventures consortium, have escaped the ignominy of having their first fixture scrubbed.

“At its meeting today the EFL board was appraised of the position in regard to the outstanding information requested in respect of ongoing matters at Bolton Wanderers,” said an EFL statement.

“The board has fully considered the club’s further submissions and is satisfied that they are sufficient to meet the requirements of the league subject to the completion of formal documentation.

“As a result the EFL board has opted not to suspend their opening day fixture with Wycombe Wanderers and it will remain as originally scheduled on Saturday 3 August 2019 at 3pm.”