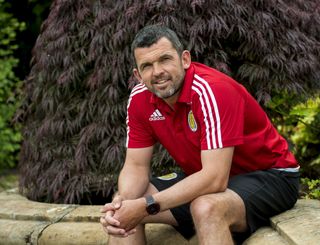 Callum Davidson believes St Johnstone have a solid foundation to build on after picking up four points from three successive Scottish Premiership away games.

Saints have endured a tough run on the road to kick off the league campaign after their meeting with Aberdeen at McDiarmid Park was postponed when eight players from Pittodrie breached coronavirus regulations, with two testing positive for Covid-19.

After drawing at newly promoted Dundee United on the opening weekend, Davidson’s men lost 3-0 to Rangers at Ibrox but then secured a dramatic 2-1 stoppage-time win over Kilmarnock at Rugby Park.

Michael O’Halloran was Saints’ match-winning hero as he capitalised on a mistake from Stuart Findlay to notch four minutes into time added on.

Kilmarnock had taken the lead through Aaron Tshibola in the 61st minute but were then reduced to 10 men when Ross Millen received a straight red card from referee Andrew Dallas for a two-footed challenge on Scott Tanser.

With a numerical advantage, Saints turned the game on its head as substitute David Wotherspoon equalised with five minutes remaining and O’Halloran then scored a last-gasp winner.

Saints will enjoy some home comforts this Thursday when they face Aberdeen in the rearranged fixture but Davidson insists he is satisfied with their points haul and their performances from their three consecutive away days.

Boss Davidson said: “This will give us something to build on, definitely.

“I think three away games, really hard away games to start the season, is pretty tough.

“So if you had asked me if I would have taken four points from those first three games I would probably have said yes. So I am quite happy where we are.

“I’m delighted with the win, it’s a wee bit funny because I was a wee bit angry with the first-half performance.

“But I was pleased with the character the players showed in the second half against a team like Kilmarnock.

“And to get a dramatic winner, which felt a bit strange with no crowd, was good.”

Kilmarnock are still searching for their first win of the new Scottish Premiership season, having recorded two draws in their opening four games.

Dyer said: “We were in control of the game but the sending-off changes the game and they smelled a little fear in us a little bit and they capitalised on it. It’s a bad day.

“It’s early days but we don’t want to get left behind. We want to start winning games and the longer you leave it the more anxious players and managers get.”