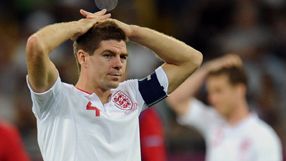 There had been some speculation the 32-year-old might quit internationals but he believes an improved performance in Ukraine and Poland bodes well even if England have to learn to keep the ball better.

"I've had a brief chat with the manager, I'm available as long as I'm wanted at this level," Gerrard told a news conference on Monday, hours after England lost on penalties to Italy in the Euro 2012 quarter-finals following a 0-0 draw in Kiev.

"At times the football hasn't been fantastic. Possession stats speak for themselves and moving forward we have to be better at keeping the ball.

"[But] supporters will agree we have played for the shirt. We think we performed to a better level than at previous tournaments for sure."

Italy had 64 percent possession and had 35 shots to England's nine.

Pundits said it would have been a travesty had Italy lost on penalties but England's dreadful record at spot-kicks, winning just one shootout in seven at major tournaments, meant justice was done.

England manager Roy Hodgson said they had done everything they could to be ready for penalties but that the tension of a big match cannot be replicated.

"Nothing that you can do will ever prepare you for the moment," he said.

"We've practised, we talked about it, we knew where their penalty takers would put their shots.

"Penalty shootouts are a game within themselves. We've got to get better to beat teams in 90 minutes."

England now fly home from their Krakow base in search of more creative and technically adept players in the youth ranks and in a Premier League already dominated by foreign names.