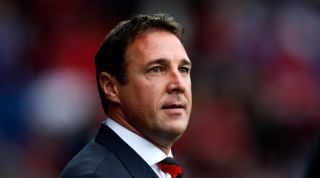 The Premier League club have called for LMA chief executive Richard Bevan to stand down as the scandal surrounding alleged texts sent by ex-Cardiff boss Mackay and head of recruitment Iain Moody continues.

The LMA released a statement on Thursday insisting that Mackay was sorry for any offence caused by alleged derogatory text messages that have been made public, but the press release was viewed as highly offensive by a series of well-respected football figures.

Mackay's conduct, the LMA said, was regrettable, but constituted "friendly text message banter", while it added that the manager had, "it seems", sent text messages that were "disrespectful of other cultures", but that he was under immense pressure at the time.

An apology from the LMA came through on Friday and Cardiff, who stated that they had not initially intended to comment on the matter, were "compelled" to reply as they urged Bevan to resign, saying they did not believe the organisation had acted honourably.

The statement read: "We had not intended to comment on matters which have been reported in the press over the last two days in relation to Malky Mackay and Iain Moody.

"However, following the statement released by the LMA last night we feel compelled to respond…we also point out that the LMA members have a 'Code of Conduct' incorporated into their managerial contracts.

"One of the requirements is 'a manager shall not use racist or other discriminatory language. A manager's behaviour should demonstrate to players and other employees under his control that discrimination in any form is unacceptable.'

"We therefore find it entirely reprehensible that the LMA should itself put out a statement which seeks to dismiss deeply offensive racist comments as 'friendly banter'.

"If that is the view held by the LMA, as appears from its statement, we consider that Richard Bevan's position is untenable and we call for his resignation.

"The LMA is the representative voice of managers, and whilst we understand it seeks to act in the best interests of its members, one of its major aims is to 'encourage honourable practice, conduct and courtesy in all professional activity'.

"Regrettably, we feel that the LMA has done no such thing in its representation of Mr Mackay and Mr Moody."

Cardiff's statement claimed that "there were many more" than the two alleged insulting texts acknowledged by Mackay and that the Welsh club had urged the ex-boss and Moody to deal with the Football Association (FA) over their actions, but their pleas were ignored.

And they also hit out at the "preposterous" claims that the news was intentionally leaked on the verge of Mackay taking the Crystal Palace job, which he looked primed to do earlier this week.

"The LMA were aware of the allegations from the morning of the search order, and their lawyers acted for Mr Mackay and Mr Moody throughout the legal process," the release continued.

"That the LMA has sought to criticise the club for the timing of the report to the FA is preposterous, because the offensive communications have been in the knowledge and possession of the LMA for many months.

"When the messages came to light, over three months ago, the club strongly encouraged and advised Mr Moody and Mr Mackay to deal with the issue directly with the FA.

"It was made clear to them, and their LMA appointed lawyers, that the nature of the communications meant the Club was under a duty to report their findings to the FA if they did not take appropriate action themselves.

"Nevertheless, with the backing of the LMA, Mr Moody and Mr Mackay chose to do nothing. The LMA were therefore complicit in the attempt to conceal these messages (of which there were many more than the two isolated texts acknowledged by Mr Mackay)."