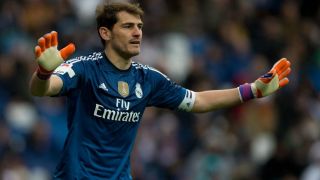 Iker Casillas has rubber-stamped his move from Real Madrid to Porto by signing a two-year contract with the Primeira Liga giants.

The legendary goalkeeper's transfer was confirmed on Saturday, signalling the end of a 25-year association with the Santiago Bernabeu outfit.

Casillas held a news conference to bid an emotional farewell to his boyhood club earlier on Sunday and struggled to hold back the tears as he delivered a pre-prepared statement.

Porto subsequently confirmed details of Casillas' new contract, which includes the option of a third year.

Casillas departs Real having amassed 725 appearances since making his debut away to Athletic Bilbao in 1999, and is expected to be replaced in Rafael Benitez's side by Manchester United keeper David de Gea.

The 34-year-old has won everything before him in a 15-year career on domestic and international fronts with Real and Spain, listing five La Liga titles and three UEFA Champions Leagues among two European Championships and a 2010 World Cup triumph.