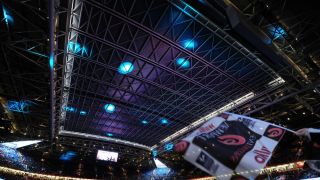 The 2017 Champions League final will be the first to be played under a closed roof following a decision by the Football Association of Wales (FAW) in relation to security fears.

The FAW confirmed on Friday that the Principality Stadium roof will be shut for the match between Juventus and Real Madrid on June 3, following talks with authorities.

The decision comes after the UK raised its terrorism threat level in the wake of Monday's suicide bomb attack in Manchester, which killed 22 people.

"Following discussions between all stakeholders, the Football Association of Wales, as the organiser of the event, has made the decision to close the roof of the National Stadium of Wales for the 2017 UEFA Champions League Final – the roof will also be closed for the two official training sessions to be held at the Stadium on Friday June 2," said the FAW.

"The decision to close the roof was taken by the FAW taking into consideration the recommendations made by the authorities over the last few weeks. The two finalists have just been made aware of the decision.

"The 2017 UEFA Champions League Final will be the first final to have been played under a closed roof and will further amplify the stadium's atmosphere when Juventus FC take on Real Madrid CF on Saturday June 3."

UEFA responded by saying: "UEFA's priority for the UEFA Champions League final, as with all its matches, is to ensure that it is a safe and secure event for all stakeholders, from the participating teams to the supporters.

"We acknowledge the decision made by the Football Association of Wales, in consultation with the South Wales Police, to close the roof for safety and security reasons."

UEFA has also insisted that the Champions Festival in Cardiff will go ahead as planned prior to the final.

Reports in Spain on Friday claimed that the open-air event in Cardiff Bay would be cancelled due to heightened security concerns, but European football's governing body says it will go ahead as planned.

"Contrary to what has been reported in some media, the fan meeting points and the Festival will take place as originally planned under strict safety and security arrangements, which have been developed during several months in close cooperation with the Football Association of Wales and local authorities," UEFA said in a statement.

"Regarding the Champions Festival, fans will still be able to enjoy wide-ranging activities, including the opportunity to take pictures with the famous UEFA Champions League trophy, play football on mini-pitches and see a legends match.

"As has always been the case in previous years, there will not be any public screening of the match itself."

The Festival, which will run from June 1 to June 4, comprises a live-music stage and a 'floating pitch', on which a match featuring legends of the game will take place.