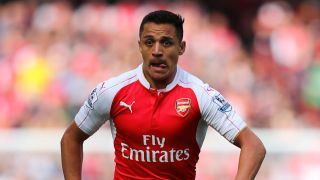 Alexis Sanchez will be looking to build on his superb run of form when Arsenal take on Ludogorets, while Barcelona and Manchester City lock horns in the Champions League again.

Napoli, meanwhile, will be hoping to make it three wins from as many games as they meet Besiktas, with only Atletico Madrid, Barcelona and Leicester City still holding a 100 per cent record, too.

Using Opta data, we take a look at the best stats ahead of Wednesday's eight group-stage matches.

- Paris Saint-Germain have lost only one of their last 40 home games in European competition.
- Basel have never won an away game against French opposition, in all competitions.
- Edinson Cavani has scored three goals across his last two Champions League appearances; having previously managed only one goal in nine immediately before this current run.
- Basel have failed to keep a clean sheet in their last 21 away games in the Champions League.
- PSG have only failed to score in one of their last 26 games at the Parc des Princes in European competition.

- Celtic have won only one of their last 10 games against German opposition, in all competitions.
- Borussia Monchengladbach are one of four teams to have lost their two Champions League group games so far this season, alongside Club Brugge, Dinamo Zagreb and Legia Warsaw.
- Celtic have lost eight of their last 10 Champions League games.
- Moussa Dembele hit two goals in his first home Champions League appearance against Man City.
- Thorgan Hazard has had a hand in five goals in his last two starts in European competition for Monchengladbach (four goals, one assist).

- Barcelona and Manchester City are facing each other for the third time in the last four seasons of the Champions League.
- Pep Guardiola is facing Barcelona as manager for the second time; as Bayern Munich boss, he was knocked out by the Catalan side in the semi-finals of the 2014-15 Champions League.
- Manchester City have lost six of their last eight trips to Spain in European competition.
- Neymar assisted five goals in two Champions League games this campaign, three more than any other player.
- Sergio Aguero has scored six goals in his three European appearances this season, both hat-tricks.

- Atletico Madrid are unbeaten in their four away games against Russian opposition, in all competitions.
- Including qualifiers, Rostov have never lost a home Champions League game.
- Since the start of the 2013-14 Champions League, Atletico have kept 23 clean sheets, one more than any other side in that time.
- Antoine Griezmann has had a hand in four of Atletico's last seven Champions League goals, scoring three and assisting one.
- Rostov have only kept one clean sheet in eight home European games (0-0 v Trabzonspor in a Europa League qualifier in 2014).