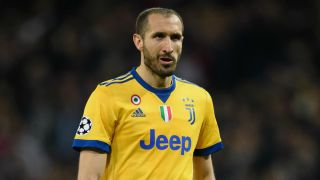 Georgio Chiellini has said he will not be making the Champions League his top priority as he embarks on his first season as captain of Juventus.

The 33-year-old defender has been a key player during Juve's domestic dominance over the last decade, playing in all of their seven consecutive title-winning seasons, but he has yet to taste glory in Europe.

Juventus have not triumphed in Europe's top club competition since 1996 - losing five finals in the years following that victory - and Chiellini was asked whether mounting a Champions League campaign would be a primary concern in 2018-19.

"No," he told Football Italia. "We will aim to win everything as always.

"Now, we have the chance to relax with peace and calmness. Then it will be a great year just like the last ones, I am sure about that."

Chiellini reflected on the departure of former Juventus captains and said he aims to leave a legacy as glittering as that of his predecessor, Gianluigi Buffon.

"I am even older, it's true. I will miss them and it's normal that it's like that," he said.

"We hope to leave behind good things for our team-mates, who can then continue when we are not there anymore."