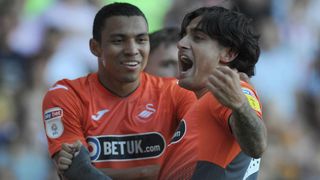 Swansea City came from behind to sink Sheffield United 2-1, while West Brom's first game since relegation from the Premier League saw them on the receiving end of the same scoreline and late drama on a dramatic opening Saturday in the Championship.

Teenage substitute Yan Dhanda was Swansea's hero at Bramall Lane as the Graham Potter era got off and running, while Millwall and Middlesbrough, Birmingham City and Norwich City, and Ipswich Town and Blackburn Rovers all shared 2-2 draws that featured injury-time equalisers.

Rovers were moments away from victory before Tayo Edun's intervention and there were mixed fortunes for the other sides promoted from League 1 – Rotherham United enduring a 5-1 thumping at Brentford, while Wigan Athletic prevailed 3-2 in a thriller against Sheffield Wednesday.

YAN THE MAN IN POTTER'S PLAN

After an underwhelming close season in the aftermath of their relegation, the signs were ominous for Swansea when George Baldock gave Sheffield United a 62nd-minute lead.

It was an outcome West Brom boss Darren Moore would have craved, but another replacement – Yanic Wildschut – struck at the death for Bolton after Josh Magennis' opener had been cancelled out by Harvey Barnes' magnificent long-range effort for Albion.

FRIEND SPARES BORO AS GIBSON HEADS FOR THE EXIT

Middlesbrough boss Tony Pulis confirmed Ben Gibson is set to complete a transfer to Burnley this weekend after his side came back from 2-0 down at The Den.

Aiden O'Brien and Lee Gregory had Neil Harris' side in the ascendency before half-time and they were cruising to the points before Martin Braithwaite pulled a goal back three minutes from time and Friend smuggled an equaliser in the seventh minute of stoppage time.

Onel Hernandez found 83rd and 94th-minute levellers or Norwich in a breathless encounter at St Andrew's, while Edun pegged back Blackburn, who looked to be heading to victory courtesy of two of last season's stand-outs – Danny Graham and Bradley Dack.

JACOBS A CRACKER FOR LATICS

Michael Jacobs scored a first-half double for Wigan either side of Atdhe Nuhiu netting from close range for Wednesday at the DW Stadium.

The burly striker was sent off for a late change on Latics defender Cedric Kipre after Nick Powell capitalised on an error from Cameron Dawson and Fernando Forestieri gave the Owls renewed hope.