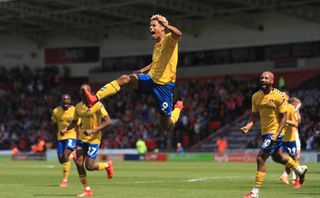 Two quickfire first-half goals put Charlton in command of their League One play-off semi-final against Doncaster as they won the first leg 2-1.

Lyle Taylor and Joe Aribo both netted in the space of three minutes to ensure the visitors quashed a bright start by hosts Doncaster.

Lee Bowyer’s side looked to be taking a healthy advantage back to The Valley until Matty Blair grabbed a late goal back for Doncaster, giving them hope for Friday night’s second leg.

Prior to the Charlton goals it had been a energetic and competitive affair, with Doncaster looking the more threatening over the opening half-hour.

The game was played at an electric pace, with both sides determined to press high and hard from the very start.

But Charlton’s comfortable lead changed the complexion of the contest, with the visitors allowing Doncaster to take the initiative and attempt to break them down.

Josh Parker thought he had given Charlton an early lead after slotting through Marko Marosi’s legs only for play to be pulled back for a foul on Andy Butler in the build-up.

Doncaster soon began to enjoy the better of the attacking play, with James Coppinger curling narrowly wide from 20 yards.

But Charlton possessed real threat, with both Herbie Kane and Butler required to produce vital blocks to deny Taylor and Aribo in quick succession.

And Parker headed a Ben Purrington cross wide from a superb position at the near post.

Kane volleyed over from 25 yards for Doncaster before Coppinger drew a smart save from Dillon Phillips with a shot on the turn.

Danny Andrew cracked the crossbar with a free-kick from close to 35 yards out as Doncaster grew in confidence.

But the game quickly turned in favour of the hosts.

First Josh Cullen stopped the ball on the byline, with Doncaster appealing in vain for offside, and drilled back across goal where, after a pinball effect, Taylor headed in from close range on 32 minutes.

Before Doncaster had time to regroup, they found themselves two goals down. Taylor took advantage of a half clearance and slid a pass into the box for Aribo, who smashed across goal and through the hands of Marosi into the far corner.

Doncaster almost pulled a goal back early in the second half when Butler powered in an effort from a corner only for Cullen to block on the goal line.

Doncaster saw plenty of the ball after the break but struggled to break down a resolute Charlton side who increasingly bolstered their defensive options as the half wore on.

And the visitors took advantage of Doncaster’s search for a way back in with Parker, Purrington and Cullen all drawing good saves from Marosi.

But Doncaster’s search was eventually rewarded when Blair nodded in a Mallik Wilks cross from close range on 87 minutes.