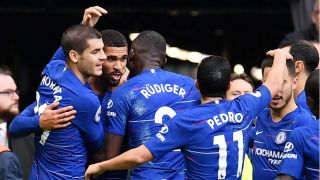 Chelsea responded to their first Premier League defeat of the season by putting west London rivals Fulham to the sword in a routine 2-0 win.

Maurizio Sarri's men were beaten 3-1 by Tottenham last time out in the league but, after easing to a 4-0 win over PAOK in the Europa League, did not to produce their best to resume normal service.

Pedro pounced on a poor passage of play from the visitors to open the scoring after just four minutes, and an excellent team goal finished off by Ruben Loftus-Cheek made the points safe late on.

Fulham had briefly threatened a leveller before that decisive blow, making it an unhappy return to Stamford Bridge for Claudio Ranieri, whose side remain bottom, while Chelsea at least momentarily move up to third.

It took a mere 220 seconds for Fulham's defensive woes to continue as sloppy play in midfield led to Chelsea's opener, their 1000th home goal in the Premier League.

1000 – Pedro’s strike for Chelsea was their 1000th home Premier League goal, becoming just the third club to reach this landmark in the competition after Manchester United (1079) and Arsenal (1029). Noughties. December 2, 2018

The France midfielder played in Pedro down the right and the former Barcelona winger finished in style, cleverly evading Alfie Mawson before slotting into the bottom-left corner.

Sergio Rico was left relatively helpless but the Fulham goalkeeper was required to prevent Olivier Giroud from doubling Chelsea's lead, producing a fine stop to keep out his close-range effort after the ex-Arsenal striker latched on to Cesar Azpilicueta's right-wing cross.

Fulham started the second half in much more promising fashion and Seri almost atoned for his earlier error, delivering a fine corner from which Calum Chambers saw his near-post header brilliantly kept out by Kepa Arrizabalaga.

Chambers forced Kepa into a diving save as Fulham threatened what had previously looked an extremely unlikely equaliser.

A glorious chance to end any Fulham hope went begging as substitute Alvaro Morata lashed over from point-blank range after Rico turned Eden Hazard's deflected effort into his path.

However, Rico was helpless as Loftus-Cheek finally put the game to bed, playing a part in and emphatically finishing off a wonderful move involving Pedro and Hazard.

5 - Ruben Loftus-Cheek has scored five goals in his last six games in all competitions, one more than he netted in his first 60 appearances in his professional club career (four goals). Emerged. December 2, 2018

What does it mean? Sarri's men short of their best

Chelsea will undoubtedly be pleased to get back to winning ways in the league after being well beaten by Spurs, but the manner of victory was far from convincing. They were in control for the most part but the fact the Blues were unable to put the game to bed should be a source of frustration for Sarri.

After a mixed game in the humbling by Tottenham, Sarri will have been pleased to see Kepa make a couple of important saves, particularly on a day when his side produced a below-par showing that better teams may have punished.

Seri has a sorry afternoon

Aside from a corner that Chambers almost converted, Seri endured a dreadful afternoon as Fulham's midfield was completely dominated. He was at fault for the goal and was consistently lackadaisical in possession.

Both Sarri and Ranieri will see their squad depth challenged by midweek fixtures. Chelsea visit Wolves while Fulham will see a home game with another of their manager's old employers, Leicester City, as a better opportunity to move off the bottom.