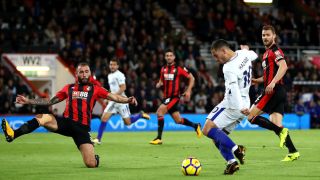 Eden Hazard says he enjoys playing against Bournemouth after he continued his fine record against the Cherries with the winner as Chelsea earned a 1-0 away win on Saturday.

The Belgium international made it five goals in four Premier League appearances against Eddie Howe's side with a left-footed second-half winner, which beat Asmir Begovic at his near post.

Chelsea were comfortable despite the small margin of victory, with Bournemouth only managing one shot on target as the champions moved back to within nine points of leaders Manchester City.

The Blues had a goal disallowed from Alvaro Morata, who also had two other excellent first-half chances to score before setting up Hazard's winner after the interval.

"I like to play against Bournemouth!" Hazard said to BT Sport.

"I try to play every game like this. I am just happy. I scored, we won.

"The only problem is that we should score more goals. We should have got three, maybe four goals to make the game easy. But we didn't concede a lot of chances and I think we deserved the win.

"It was a very good goal, important also. When you play this kind of game you just need to win. We have three points and we move on.

"All the team deserve this, we did well defensively, offensively also. I think Thibaut Courtois needed this for the confidence."

Asked if City could be caught, Hazard said: "The season is long, you never know what can happen.

"They are top and play well with a lot of goals - but we have a lot of games to play, we will see at the end of the season."

Next week is huge for Chelsea, who are away to Roma in the Champions League before a crunch Premier League clash against second-placed Manchester United at Stamford Bridge.