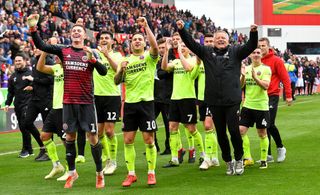 Sheffield United boss Chris Wilder hailed his side’s second-half display after they ended their Championship promotion-winning season with a 2-2 draw away at Stoke.

Enda Stevens’ late leveller secured a point for the Blades, cancelling out goals from Stoke pair Sam Vokes and Ryan Shawcross either side of Kieran Dowell’s initial equaliser.

The South Yorkshire club ended the Championship campaign as runners-up behind Norwich, sealing a Premier League return after 12-years away, while Stoke finish down in 16th position.

Wilder said: “It was a tough one for the players after the emotions of last weekend as well as drinking every pub in Sheffield dry for the last four days.

“In the first half it didn’t go for us but we were up against some really good players who want to end the season on a high, so we knew it was going to be a tough afternoon for us here.

“In the second half, we were more like it. We epitomised what we are about.

“The result is the right result as far as I am concerned. We didn’t do enough to win but I was just delighted with the way we turned it around in the second half and went for what is a powerful club in this division with a lot of powerful players.

“Congratulations to Daniel (Farke) and Norwich City, it has been a thrilling race between us, Norwich and Leeds and I’ve always said the best team wins the Championship and we are delighted and proud to be joining them in the Premier League.”

Stoke boss Nathan Jones said: “It was a different kind of draw to what we have had.

“We looked solid, we haven’t conceded much. I thought in the first half we were excellent. Sheffield United changed in the second half for us which I think is a massive compliment.

“We were on the front foot, we were very positive, it was just a three, four- or five-minute period after half-time that I was really disappointed and considering the end-of-season game, I was really pleased with the level of performance today and I thought that we probably had enough chances to have won.

“We’ve had a tough season. It has been a tough season in choices I have had to make, what I’ve been through, we’ve come in to here to embark on something and that’s why we did it.

“I sacrificed a promotion at Luton to come here as it was a big job and we’ve made great inroads and I’m excited as to what we can achieve.”