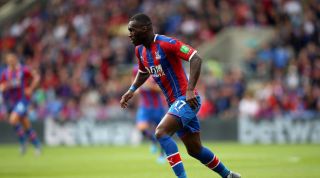 The Reds, then managed by Brendan Rodgers, signed Benteke from Aston Villa for £32.5m in summer 2015.

Klopp replaced Rodgers in the Anfield dugout in October of that year, and Benteke soon found himself out of the starting XI.

He was subsequently sold to Crystal Palace ahead of the 2016/17 campaign in a deal worth £32m.

However, he found the net just three times in 2017/18, and on only one occasion during an injury-hit season last time out.

And Benteke has yet to open his account in the current campaign, with Jordan Ayew now ahead of him in the centre-forward pecking order.

However, the 28-year-old thinks he could still do a job at Anfield.

"Yeah," he replied when SPORTbible asked whether he believed he could thrive alongside Sadio Mane and Mohamed Salah.

"It's easy to say now because I play for Palace and they play for Liverpool, but when you train every day with the same players and the manager believes in you, it's easier.

"People will say I'm making excuses, but everyone knows the club was going through a transition when I was there. If you compare the team from when I was there to the current team, I think there are only three, four players still in the first XI, most of them are new.

"I started well, but he [Rodgers] was already under pressure from the previous season because they almost won the league, and then Klopp came and everything changed. When he came to Liverpool he said, 'Sorry, I want to play a different [style of] football - I want to have quick, small, sharp players'. I tried to fight for my spot, but at the end of the season he said, 'It's best if you find a new situation too, I won't hold you up.'"

Liverpool maintained their perfect start to the season with a 1-0 victory over Sheffield United on Saturday.