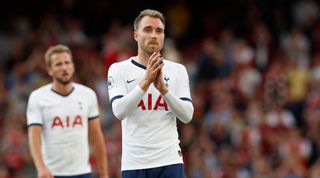 Real Madrid could decide against renewing their interest in Tottenham playmaker Christian Eriksen, according to reports.

The Denmark international is out of contract next June and looks set to seek pastures new after declaring himself ready for a “new challenge”.

He was heavily linked with a move to the Santiago Bernabeu in the summer and reportedly turned down the chance to join Manchester United because of his desire to play in Spain.

Spurs are thought to be willing to offload the former Ajax man in January, as that would allow them to pocket a transfer fee.

However, Eriksen would prefer to wait until summer 2020 before moving on, because he would be in a stronger position to negotiate a better wage and signing-on bonus if he was a free agent.

The 27-year-old will be able to sign a pre-contract agreement with a foreign club in the New Year, and it was widely assumed that Madrid would explore such an option.

However, The Sun write that los Blancos are having second thoughts and could even drop their interest in Eriksen.

The primary reason for that is the form of Federico Valverde, who has impressed since returning to the Bernabeu after a loan spell at Deportivo La Coruna.

The Uruguay international is only 21 and has earned the admiration of manager Zinedine Zidane for the way he has performed so far this season.

Madrid spent heavily in the summer and, according to reports in Spain, have already decided that they will not make any new signings in January.

Eriksen will still hope that the Spanish giants make him an offer next summer, but the saga has taken another twist due to Valverde's recent displays.

Tottenham returned to winning ways with a 5-0 thrashing of Red Star Belgrade on Tuesday, with Eriksen an unused substitute.