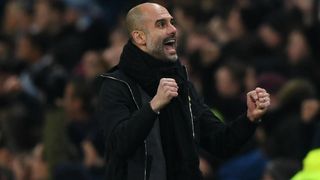 Pep Guardiola knows his Manchester City revolution will be judged by the weight of silverware they win ahead of Sunday's EFL Cup final against Arsenal.

Former Barcelona and Bayern Munich boss Guardiola has overhauled City's playing style and his swashbuckling side are odds-on to claim the Premier League title as they sit 16 points ahead of rivals Manchester United.

But his debut season in Manchester saw Guardiola failed to collect a major honour in a campaign for the first time in his coaching career, with memories of Arsenal ending their bid for FA Cup glory in a Wembley semi-final set to loom over Sunday's return to the scene of the crime.

City's FA Cup ambitions this time around were sensationally slashed on the less illustrious stage of Wigan Athletic's DW Stadium on Monday.

Talk of securing an unprecedented quadruple spoke volumes regarding City's form at home and abroad this term but, with that now consigned to the usual fate of pipe dreams, Guardiola is determined to improve upon a personal club finals record that reads played 10, won nine.

"We have to lift titles to give more value to what we have done," he told a pre-match news conference.

"In August we said the same, we'll be judged for how many titles we win, for the big clubs it is always the same. In these eight months together and we've lived what we lived - it belongs to us.

"Of course we'll be judged on it, this is a club that needs to grow up every year and win titles, now we have [the chance to win] the first one."

Quadruple questions have generally prompted a furrowed brow from Guardiola and, although he said he would sooner have lost Premier League matches than be humbled by Will Grigg, he conveyed a sense of relief over the prospect as chasing a tangible title against Arsenal rather than a more fantastical ambition.

"When people asked about winning four titles, I said of course we'll try but the big teams have not been able to do that, so why should I think we can do it?" he said.

"We have a final and we will try to do what we have done [in other games], be who we are.

"Then in the Premier League we have [to win] six games to be champions, the most prestigious competition, then we'll see next year. Then at the end of our time together we will see what we have done."

"Have no regrets" Pep tells the players ahead of Sunday's final. February 23, 2018

An old-hand on such occasions as both a player and coach – famously at Wembley in both capacities with Barca – Guardiola is still attuned to the sense of wonder and magic around the showpiece fixtures.

"Finals are special," he explained. "They belong especially to the players - how brave you are, with what courage do you play these kind of games.

"I'd like to see my team play like we were most of the season. The final does not have to be something different. It's in front of 90,000 people in a magnificent stadium in London – this is an argument to be who were are, or at least to try it.

"Don't have regrets after the game, like we didn't after the Wigan game. If you have to lose, improve."