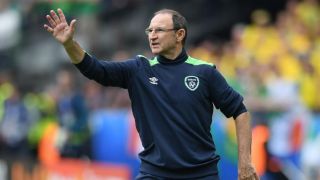 Republic of Ireland manager Martin O'Neill praised Ciaran Clark's performance in the 1-1 draw against Sweden and urged him not to dwell on his crucial own goal.

The Aston Villa defender headed into his own net with 20 minutes of Ireland's opening Group E match remaining, cancelling out Wes Hoolahan's opener and handing Sweden a share of the points.

But O'Neill had words of consolation for the 26-year-old, and expressed his satisfaction with the way his side played.

"We were coping with the pressure in the second half pretty well. We conceded the goal and impetus and momentum changes.

"I'm immensely proud of the team, I thought we played really, really well. We have one point instead of three on the board and we'll have to do something about it."

Some of the less experienced members of O'Neill's squad rose to the occasion at Stade de France, with Derby County's Jeff Hendrick and Norwich City's Robbie Brady making a significant impact, whereas the likes of Shane Long and substitute Robbie Keane failed to provide a cutting edge in attack.

O'Neill said: "It was a winnable game, the way it happened. That's the disappointment. We should be speaking to you here with three points on the board instead of one.

"We've got more than fighting spirit in the side. We've got players who are improving at international level, spurred on by a magical crowd.

"You didn't have to say too much at half-time to the players. They were great, really great, and should have been in the lead.

"We played brilliantly. But you have to put the ball in the net and we had the chances to do so in the first half. That's probably the reason we are sitting here with one point instead of three."

O'Neill also confirmed that Stoke City forward Jonathan Walters was substituted due to an injury to his Achilles tendon, but congratulated his side on keeping Sweden striker Zlatan Ibrahimovic relatively quiet in the game.

Despite providing the cross for Clark's own-goal, Ibrahimovic was denied the opportunity to score in a record-breaking fourth consecutive European Championship finals, and O'Neill said: "I thought the players played him exceptionally well.

"I felt we were dominant in that aspect of it. We forced him away from our goal as much as we possibly could. It worked a treat and the players have to take great credit for that."