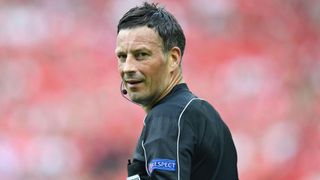 UEFA has announced Mark Clattenburg will referee the final of Euro 2016 between France and Portugal on Sunday.

The Englishman, a regular Premier League official, will become the second man after Portugal's Pedro Proenca in 2012 to referee both the Champions League final and European Championship decider in the same season, having already been the man in the middle for Real Madrid's penalty-shootout victory over Atletico Madrid at San Siro in May.

He also took charge of the FA Cup final between Manchester United and Crystal Palace this season and will be the first English referee of UEFA's quadrennial international showpiece since Arthur Holland in 1964, when Spain defeated Soviet Union 2-1.

Simon Beck and Jack Collin will serve as Clattenburg's assistants at Stade de France, while Anthony Taylor and Andre Marriner have been selected as additional assistants.

Viktor Kassai of Hungary and his compatriot Gyorgy Ring are the fourth official and reserve assistant respectively in Paris.