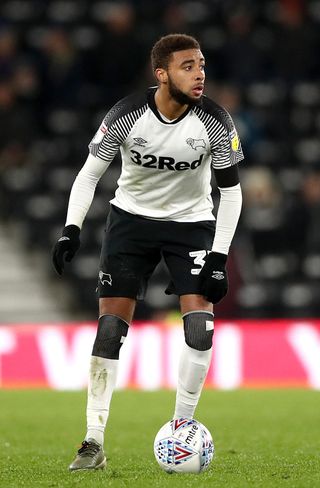 Derby manager Phillip Cocu told Jayden Bogle to put the team before his ego after his mistake led to Huddersfield’s equaliser in a 1-1 draw at Pride Park.

Bogle was dropped but came on when Andre Wisdom was injured only to give the ball away to Harry Toffolo, who ran through to score.

Huddersfield deserved a point and should have been in front when Fraizer Campbell put a free header wide from a corner.

Campbell was unlucky in the 47th minute when his shot from the edge of the box came back off a post and Derby took advantage in the 61st minute when Tom Lawrence found the top corner from 20 yards.

The visitors were convinced they should have had a penalty when Campbell looked to be clipped by Matt Clarke but they levelled in the 81st minute.

Bogle’s weak header was pounced on by Toffolo, who ran into the box and beat Kelle Roos at his near post.

Roos rescued Derby three minutes later when he denied Chris Willock after the sub was played in by Steve Mounie and Cocu admitted he was disappointed by the way his team conceded.

Cocu said: “It was bad defending, it’s never one mistake or bad judgement but the clearance with the header by Bogle, it was a very easy header but he gives it away.

“Then he doesn’t push him to the outside or go to the inside, it’s just basic, so for me it confirmed he was maybe upset he didn’t play.

“But you have to put your ego aside and when your team-mates need you, you have to be 100 per cent focused in the game so it was obvious it was not good enough from his side.

“I don’t think confidence is a problem with Jayden, he is a right full-back with a lot of potential going forward but he has to learn that if you are a defender, you have a big responsibility towards the team to defend.

“I think always a second season, especially if you’ve played all season, is harder, expectations change but I think he can have a really big career.

“At his age he’s played a lot of games but he also has to show he’s open and willing to improve parts of his game.

“The last two games were not like he can play which was the reason why he didn’t start.”

Huddersfield manager Danny Cowley was delighted for Toffolo, who he signed from former club Lincoln in January.

He said: “He’s a really good kid, he’s a down to earth honest, hard-working boy, he’s got three kids, a lovely family and it’s really nice when good things happen to good people.

“He’s come to this level and it’s a huge jump as everyone knows. This time last year he was playing in League Two and he’s done really well. It was a great goal and he’s going to be fine.

“Harry’s improving all the time, he’s playing with a real confidence and I always say to all the young players, the better they do the harder they have to work.

“It’s one thing getting to the level, it’s another mastering the level but he’s improving by the day.”