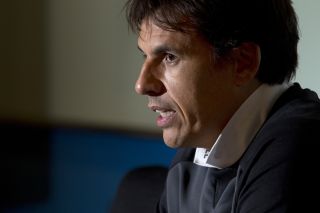 That gave Wales some solace from a campaign that saw their hopes of reaching the finals in Brazil next year extinguished some time ago, and with a new deal with the Welsh FA still to be agreed, Coleman's position remains unclear.

When questioned about his future after the game, he said: "I said before the game that my contract finished at the end of November and I'm always looking long-term and the bigger picture, but I won't change what I've said.

"I'm going to be there for the Finland game (a friendly in November) and then after that I'll look at everything and I will decide if I am the man going forward or not.

"Maybe someone else will decide that before I do, but we'll enjoy tonight and these last 10 days."

Coleman was also quick to stress that his tenure should not be decided on the back of the last two games, where they have picked up four points from a possible six.

"I want people to be realistic, to look at the whole campaign and the problems we face," he added on Sky Sports.

"If I was going to say goodbye to it, I would have to make 100 per cent sure that it was the right decision for me.

"I want Wales to succeed, and if I don't think I can do that, then I will be more than happy to step aside."