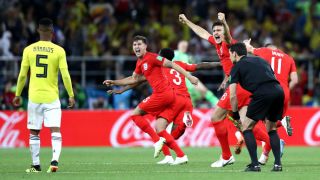 Gareth Southgate's side prevailed 4-3 on penalties after the game at Spartak Stadium finished 1-1, Harry Kane having netted his sixth goal of the tournament before Colombia centre-back Yerry Mina headed home in stoppage time to force an additional period.

Referee Mark Geiger struggled to keep control of a tempestuous encounter, with Wilmar Barrios only booked for headbutting Jordan Henderson during the first half, while Colombia players forcing a lengthy delay before Kane's 57th-minute penalty and roughing up the turf around the spot was an example of the gamesmanship in play throughout.

Stones clashed with Colombia striker Radamel Falcao during the contest and won plaudits for an imposing display. With Sweden up next in the quarter-finals on Saturday, the Manchester City defender reflected upon how his team-mates stayed cool under extreme pressure.

"The game was so strange," he told reporters in a news conference at England's Repino base.

"There were a lot of off-the-ball things you probably haven't heard about, all the sort of things that you don't really hear in a football match.

"I think on our behalf, we showed massive character to keep a cool head and not get sucked into their game.

"When you play against a team like that who want to fight, disturb your momentum, you can sometimes get dragged into it and that's what they want.

"That's a great sign for the team, to make sure we have that quality of tunnel vision to get out of the game and stick to our game plan. It was a difficult situation to be in and we can look back on it and be very proud of it."

Raheem Sterling was shoulder barged by Eduardo Urtasun, a member of the Colombia coaching staff, as he left the field at half-time - one of a number of incidents that left City colleague Stones aghast.

"Some things I hadn't even seen, the incident with Raheem and one of their staff - I've never seen a game like this before and how they behaved," he said.

"I thought there could have been several red cards in that game from what happened. If the referee sees the headbutt it's a totally different game.

"There were things that we've never experienced before, it was just so surprising to come across those things."

Stones denied mocking Barrios when Eric Dier netted the decisive penalty as photographs suggested – he insists he was merely shouting in the direction of the England bench – but having the last laugh tasted undeniably sweet.

"To beat them at football – you can't do anything better than that," he added. "That'll hurt more than us getting into a scrap with them and they get one of our players sent off.

"At the end of the day they're back on the plane, we're still here."