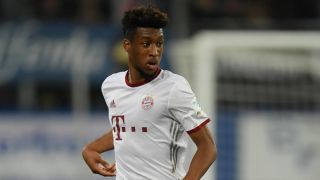 Kingsley Coman has revealed he considered signing for Manchester City before committing his future to Bayern Munich.

The France international completed a permanent deal worth a total of €35million, including loan fees, in April after Bayern took up their option to buy the attacking midfielder from Juventus.

Concerns over his playing time at Allianz Arena prompted Coman to weigh up the possibility of moving instead to City, where he would have been reunited with former Bayern boss Pep Guardiola.

But, after receiving assurances from Bayern, he opted not to pursue the alternative of a transfer to England.

"I didn't hesitate in relation to Manchester City or the coach, but because of my situation," Coman told French television channel TF1.

"I'm young, I'm in a time of my life where I need to play. If it wasn't here, if it was difficult, I was ready to think about leaving.

"But I spoke to the president about the club's project, about me, and everything was sorted out."

Although Coman now has a contract with newly-crowned Bundesliga champions Bayern through to 2020, the 20-year-old remains unsure about his future.

"Normally, yes," Coman said when asked if he would stay at Bayern for next season. "Having said that, you don't know what can happen.

"If tomorrow - I know it's not possible - they buy [Lionel] Messi, [Cristiano] Ronaldo and everyone and I know it's going to be difficult, I could think about leaving. But normally, yes.

"I'm very satisfied with my career. Today, I'm at Bayern. I don't see why I should have regrets."