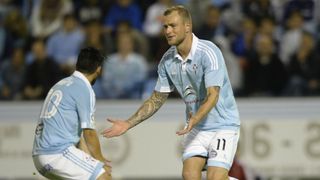 Las Palmas will take a slender lead into the home leg of their Copa del Rey last-16 tie against Eibar after Momo's 90th-minute strike sunk their nine-man opponents 3-2.

Eibar are 10 points better off than Las Palmas in La Liga at present and this gulf appeared to be in evidence when Izet Hajrovic and Saul Berjon twice put them ahead in the first-half.

Aythami's 16th-minute header came in between those goals and Mibarak Wakaso fired into the top corner from outside the box after an hour before Eibar's discipline deserted them entirely.

Hajrovic saw red in the 82nd minute for a knee-high tackle on Vicente Gomez and substitute Gonzalo Escalante joined him in the dressing room four minutes later for a lunge on Wakaso.

The depleted hosts could not hang on as Las Palmas hogged possession to craft an opening for Momo, who crashed home emphatically.

In Thursday's other game, Celta Vigo established a 3-0 advantage over Cadiz of Segunda B, frontman John Guidetti notching a brace either side of Jonny's low drive.