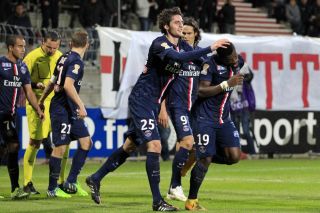 Ligue 2's Ajaccio were rewarded after withstanding growing pressure from the visitors, given a penalty just before the half-hour mark, which was duly tucked away by veteran midfielder Johan Cavalli at the Stade Francois Coty.

Uruguay international striker Edinson Cavani restored parity for Laurent Blanc's side nine minutes into the second half, who were without the rested Thiago Silva and Zlatan Ibrahimovic for the clash and had lost their previous two fixtures.

The game grew frantic as both teams searched for a decisive second, but the introduction of French forward Jean-Christophe Bahebeck sparked PSG.

Substitute Bahebeck whipped in an inch-perfect corner to the head of Serge Aurier with 10 minutes remaining,

Bahebeck got on the scoresheet himself to put the result beyond all doubt seven minutes from time, sliding in to tap home Lucas Moura's cross at the back post.

Meanwhile, top-flight pair Lille and Monaco were both triumphant on penalties as they sealed quarter-final spots.

Hosts Lille were 6-5 winners from the spot after their tie against Bordeaux ended 1-1 at the end of extra time at the Stade Pierre-Mauroy.

Mariano had given Bordeaux a 16th-minute lead, only for Lille to hit back through Michael Frey 14 minutes later.

It was the same story at the Stade de Gerland as visitors Monaco upstaged last season's runners-up Lyon 5-4 on penalties.

Dutch goalkeeper Maarten Stekelenburg was the hero in the shoot-out after both teams cancelled each other out in extra time.

Monaco substitute Yannick Ferreira Carrasco broke the deadlock in the 94th minute before Alexandre Lacazette sent the match to penalties with a 105th-minute equaliser.

High-flying Guingamp continued their brilliant run of form, account for second-tier side Arles 2-0 away from home.

After stunning PSG on Sunday, goals to Christophe Mandanne and Claudio Beauvue extended Guingamp's winning streak to five matches in all competitions.