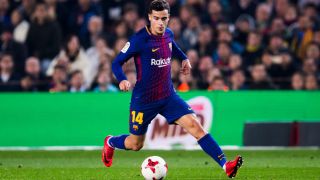 Philippe Coutinho has been handed his first Barcelona start for Sunday's LaLiga game against Deportivo Alaves.

Having completed his much-anticipated move from Liverpool earlier this month, for a fee that could reportedly rise to €160m, Coutinho came off the bench to make his Barca debut against Espanyol in the Copa del Rey on Thursday.

The Brazil international was duly named in Ernesto Valverde's first XI to face Alaves, in one of five changes to the Barca side.

Marc-Andre Ter Stegen, Nelson Semedo, Lucas Digne and Paulinho were the other players restored to the starting line-up.

Victory against Alaves would see Barca restore their lead over Atletico Madrid at the top of LaLiga to 11 points.