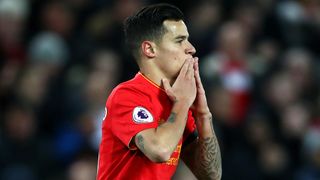 The 24-year-old has been linked with a move to Camp Nou following his excellent displays this season, with the Brazilian scoring 13 goals in 31 Premier League outings to help fire his team into the Champions League.

Coutinho recently stressed that he would rather build a legacy at Liverpool than become a squad player at Barca, but Tite has little doubt he would become a key figure for the Catalans if he were to make the move.

"It absolutely makes sense for me that Barcelona are after him," Tite told Sport.

"I do not want to be pretentious about Barcelona, but who would not want a player like Coutinho, with his magic, his ability to invent and create, to change the rhythm and to build play?

"We are obviously talking about a hypothetical situation, but Barcelona have Sergio Busquets sitting deep and two midfielders in front of him. Ivan Rakitic and Andres Iniesta are the thinking men in the Barcelona team. Coutinho could play in that role.

"He is an ideal player for Barcelona."

Coutinho signed a new contract with Liverpool in January that takes him through to 2022.