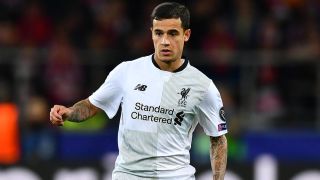 Liverpool star Philippe Coutinho insisted he was committed to the Premier League club, saying he would give his "maximum".

Coutinho, 25, was targeted by LaLiga leaders Barcelona during the close-season, but Liverpool stood firm to hold onto the Brazil international.

The attacking midfielder has returned to make five appearances this campaign, including scoring in the 1-1 Champions League draw against Spartak Moscow on Tuesday.

Coutinho, who is contracted until mid-2022, said he would give his all for Liverpool.

"I'm here to defend the colours, to give my maximum."

The draw in Russia was Liverpool's second straight in Group E, in which they sit second.

Coutinho remains upbeat about his side's chances of progressing, even if they wanted more out of their clash with Spartak.

"It wasn't really the result we wanted, but we have to keep working and there are more games, another four games to come," he said.