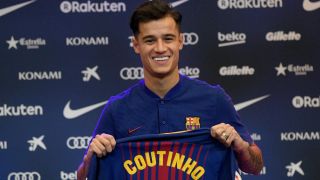 Coutinho is yet to make his debut for the club due to a thigh injury, while no shirt number was confirmed when he completed a protracted move from Liverpool.

Javier Mascherano's departure to Chinese Super League side Hebei China Fortune this week has freed up the number 14 for Coutinho.

But while Mascherano wore the number during his seven-year spell at Camp Nou, Barcelona's number 14 shirt is more closely associated with the late Johan Cruyff.

The Dutch master joined Barcelona for what was then a world-record fee and helped the club to their first LaLiga title in over a decade.

Cruyff later returned for a spell as Barcelona's coach and he is regarded as one of the most important figures in the history of the club.

Emmanuel Amunike, Johan's son Jordi and Thierry Henry are among the other players to have worn the number 14 shirt for Barcelona.

Coutinho wore 10 at Liverpool, but Lionel Messi's presence ensured the Brazilian had to opt for a new number.

Reports in Spain have indicated the number seven shirt, worn by Arda Turan, Pedro and David Villa among others, is being held for the arrival of Antoine Griezmann.

But Barca have "strongly denied" claims they have agreed a deal to bring in the France forward at the end of the season.