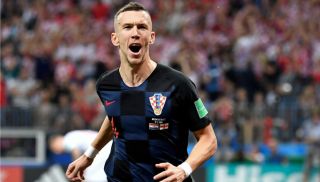 Croatia will use their defeat in the 1998 World Cup semi-finals to France as motivation in Sunday's World Cup final, says Ivan Perisic.

Perisic's equaliser and Mario Mandzukic's composed finish in the second half of extra time saw Croatia come from behind to beat England 2-1 Wednesday's semi-final, Kieran Trippier's free-kick having put Gareth Southgate's side ahead in the fifth minute.

Zlatko Dalic's men will now contest their first World Cup final on Sunday against France, 20 years on from losing to Les Bleus in the last four in their first appearance at the competition.

Croatia will be underdogs for the final, but Perisic told FIFA.com: "France stopped us in the semi-finals in 1998. We will have some extra motivation because of that, for sure.

"They are favourites, but we will do our best to surprise them. We have three days to prepare ourselves. Our dream is so close now."

1998 - Croatia are the first team with a semi-final win after conceding the first goal since France in 1998 against Croatia. Revanche. July 11, 2018