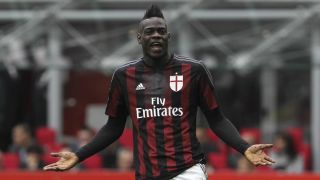 Crotone president Raffaele Vrenna has confirmed the newly promoted Serie A side are interested in signing Liverpool striker Mario Balotelli.

The Italy international endured a difficult 2015-16 campaign on loan at AC Milan with just three goals in all competitions, and he has returned to Anfield ahead of next season.

Balotelli is unlikely to play a big role in manager Jurgen Klopp's plans, though, and Crotone are ready to offer the 25-year-old a way out.

"Crotone are the ideal environment for young talent to grow and express themselves.

"We could be the right place to revive an incredible talent like that of Balotelli, who has unfortunately just experienced a couple of difficult seasons."

Crotone face stiff competition for Sampdoria in the race for the flamboyant attacker, with the Genoa-based side previously admitting they are also interested in signing the former Inter star.