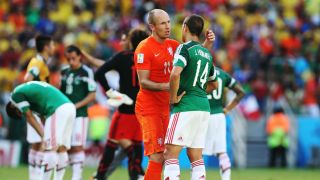 The "curse of the fifth game" will rear its ugly head once again for Mexico fans on Monday when they meet Brazil in the last 16 of the World Cup.

Juan Carlos Osorio's side paid the price for a sloppy end to their Group F campaign, a surprise 3-0 defeat to Sweden relegating them to second place when just a point would have been enough to top the table and set up a more favourable second-round meeting with Switzerland.

Instead they must face the five-time champions, who qualified as Group E winners and are being touted as favourites to claim a record sixth crown in Russia.

And on top of the considerable challenges posed by the likes of Neymar, Philippe Coutinho and Gabriel Jesus, the clash in Samara represents a significant psychological hurdle for Mexico, who have been knocked out at the last-16 stage in each of the previous six World Cups.

That depressing statistic has haunted fans of El Tri to the point it has taken on its own identity, in reference to the fifth game at a finals that has not been reached for more than a generation.

To make matters worse, none of the six sides to have defeated Mexico during that run have even gone on to reach the final, let alone win the competition.

Bud Light, famous for its 'Dilly Dilly!' advertising campaign, will be giving out free beer to Californians should the curse be broken. And if their beverages are to taste all the sweeter, Mexico fans ought to keep in mind the past 24 years of World Cup heartache...

Having just squeezed through as group winners, when all four teams finished on four points, Mexico were undone by the tournament's surprise package Bulgaria. El Tri missed their first three penalties in the shoot-out before Yordan Letchkov converted the decisive kick, and the curse was born.

On this occasion, Mexico could only finish second despite going unbeaten in the group stages, proving the entertainers with a total of 12 goals scored across their three matches. All appeared to be going to plan in the knockouts as Luis Hernandez put them ahead against Germany, but goals from Jurgen Klinsmann and Oliver Bierhoff in the final 15 minutes sent them tumbling out.

Another undefeated opening phase, accruing seven points, saw them advance as group winners ahead of the likes of Italy and Croatia. But once again they came unstuck immediately, and a painful demise it was too as neighbours United States sealed their quarter-final place thanks to Brian McBride and Landon Donovan.

As against Germany eight years prior, Mexico took the lead in their last-16 clash through Rafael Marquez (more on him later) in what was his second World Cup. (Remarkably, at the age of 39, Russia 2018 is his fifth finals). But that advantage was swiftly cancelled out by Hernan Crespo and, in extra-time, Maxi Rodriguez scored one of the greatest goals in World Cup history with a sensational chest and volley from outside the box.

Another tournament, another successful group-stage campaign and, for the second finals in succession, a second-round defeat to Argentina. Carlos Tevez proved their tormentor-in-chief on this occasion, scoring a brace either side of Gonzalo Higuain's effort. Javier Hernandez's fine strike inside the final 20 minutes was scant consolation as the curse took an even greater hold.

Arguably the most shattering of the six defeats. Giovani dos Santos' superb 30-yard drive had them ahead shortly after the break and it stayed that way until the 88th minute, when Wesley Sneijder pounced on a loose ball from a corner to rifle home. Then, in stoppage time, Arjen Robben went down under a challenge from Marquez (remember him?) inside the box and Klaas-Jan Huntelaar converted the 94th-minute penalty as Mexico hearts were broken for a sixth finals in a row.