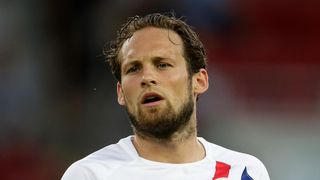 The soundtrack to England's World Cup campaign - Three Lions - has been given a Dutch rewrite as Ajax welcomed Daley Blind back to the club by recording 'Daley's Coming Home'.

The versatile defender, who emerged from the Ajax academy and broke into the first-team at his hometown club in 2008-09, returned after agreeing a transfer from Manchester United for a fee potentially rising to €20.5million.

Blind's homecoming tune makes reference to the fact that Ajax have gone four years without winning the Eredivisie and harks back to the club's glory days of the 1990s with lines like "Frank de Boer still gleaming".

Where England fans sing "Three Lions on a shirt" as originally penned by David Baddiel, Frank Skinner and the Lightning Seeds, Ajax's version goes with "Three stars on a shirt" - the club's shirt features three stars above the badge to reflect the achievement of winning more than 30 Dutch league titles.

Whether the song catches on at Johan Cruyff Arena remains to be seen, but the lyrics are as follows:

Everyone seems to know the score,

They've seen it all before

They just know, they're so sure

That Ajax: gonna throw it away, gonna blow it away

But I know they can play

Three stars on the shirt