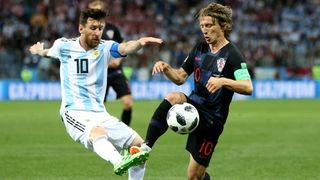 Zlatko Dalic hopes Luka Modric will be named the best player at the 2018 World Cup as it will mean Croatia have done something "significant" in Russia.

Modric has been widely praised as one of the standout performers from the group stage, having inspired his side to take nine points out of nine against Iceland, Argentina and Nigeria.

All eyes will be on the Real Madrid midfielder again on Sunday, when he does battle with Denmark star Christian Eriksen in the last-16 clash in Nizhny Novgorod, where he scored a stunning goal in the 3-0 win over Argentina.

With Jorge Sampaoli's side having lost 4-3 to France in a thriller on Saturday, the Golden Ball won by Lionel Messi back in 2014 is now almost certainly set to end up in different hands.

And Dalic thinks Croatia will likely have had a tournament to remember if Modric is the eventual winner.

"It's not going to go to Messi because they are 4-2 down right now," he told a news conference, which took place during Argentina's clash with France.

"I'd be the happiest man on earth if [Modric] did it. It would mean Croatia have done something significant. I hope this is so."

Croatia have been tipped as possible candidates to go all the way at the World Cup due to their performances in the group stage, but Dalic says those games will count for nothing if they do not deliver against Denmark.

"Our greatest pressure comes from within," he said. "We've achieved something in the groups but it will mean nothing if we don't underline that.

"The group is now behind us. It gives us some confidence in our ability but we can't dwell on that. I'm fully confident in the squad, I know it won't be easy.

"It's nice to hear we've been recognised as a team who played well in the group but let me reiterate: it will mean nothing if we do not underline it [on Sunday]."

For Dalic, the 2018 finals will be remembered as the peak of his career, regardless of the result at Nizhny Novgorod Stadium.

"I'm so proud to be a part of this and if we play well, I think we will have achieved a great thing for ourselves, our families and Croatia," he said. "This is what keeps me going.

"I have to be calm but there's a struggle in me. If God allows [the win], we'll be overjoyed. If not, I'll be proud of the time I've spent with these boys. Whatever comes next, these will have been the best days of my career."