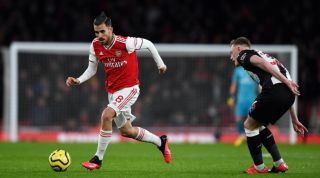 Dani Ceballos would rather return to Real Betis this summer than make his stay at Arsenal permanent, reports Estadio Deportivo.

The midfielder is currently on a season's long loan at the Emirates Stadium from Real Madrid and the Gunners are interested in signing Ceballos permanently.

Yet the 23-year-old knows the 2020/21 season, whenever it gets underway after the coronavirus pandemic, could be a big one in his career. With the European Championships now taking place in 2021, Ceballos wants to be pushing for a place in the Spain squad.

He is unsure whether that will happen if he remains in North London, with game time having been somewhat limited this term with 14 Premier League appearances to his name to date.

Minutes on the pitch have become even more scarce since Unai Emery was sacked, with Ceballos only playing three times in the league since Mikel Arteta was named head coach.

It doesn't seem as if the Spain international has a future at the Estadio Santiago Bernabeu either, with Madrid keen to cash in on him.

They are looking at Betis attacker Nabil Fekir instead, who has also piqued the interest of Arsenal. If Fekir were to leave Los Verdiblancos then that would make a Ceballos return more likely.

The Spaniard came through the youth system at the Estadio Benito Villamarin before leaving for Los Blancos in 2017.

Arsenal and Tottenham among sides interested in Dejan Lovren

Why David Rocastle means so much to Arsenal fans