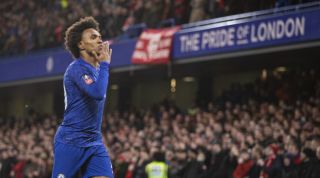 Willian has given Arsenal hope of signing the Chelsea winger this summer with his latest comments.

The 32-year-old is out of contract on June 30, although it is not clear exactly what will happen with English football currently on hold because of the coronavirus pandemic.

Blues manager, Frank Lampard, would like Willian to stay, but the club are unwilling to offer the Brazil international a contract longer than 12 months.

If the South American does leave Stamford Bridge, then he says would like to remain in the Premier League. The Sun have previously reported that the Gunners are interested in Willian if he is available as a free transfer.

"My desire is to stay in the Premier League, but I don't rule out playing in other leagues, no," he told ESPN.

"I'm going to play until the end of the season and see what happens.

Contract negotiations with Willian have been put on hold because of the coronavirus outbreak.

The forward is currently back in his native Brazil with his family. He has an official return date of April 13, but in truth, it's not clear when exactly he will come back to England.

Before flying out, all of the Blues squad were in isolation after teammate Callum Hudson-Odoi tested positive for Covid-19.

However, Willian has ruled out coming back to his home country just yet. Despite confirming his love for former side Corinthians, he has now lived in Europe for 14 years and wants to continue doing so for the foreseeable future.