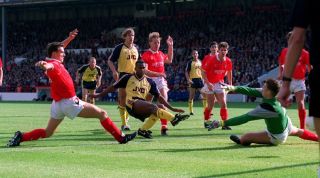 Arsenal's icons tend to fall into one of two categories: they either win a tidy stash of silverware while with the club, or they embody the Gunners' once-famed and revered team spirit. A select few players fall into both camps. The much-loved David Rocastle, who died from cancer 19 years ago, is one such figure.

'Rocky' broke into the Arsenal side against Newcastle in September 1985. The first in a line of youth team graduates - including Martin Hayes, Niall Quinn and Martin Keown - to be blooded by under-pressure manager Don Howe, Rocastle made an immediate impact on the right-wing, jinking infield and showing selflessness in bringing his team-mates into play.

Not even Rocky, though, was able to pull that underachieving Gunners side out of the morass in which it found itself. The goalless draw against the Magpies was so atrocious that a Radio 2 commentator, when asked to summarise the match during the second half, simply said: "0-0, and back to the studio."

Yet Rocastle had made a huge impression on Arsenal fans and, despite the fact that he flitted in and out of the side throughout the rest of that fitful campaign (Howe resigned in April 1986), there was an instant buzz whenever his name was announced.

The arrival of George Graham at Highbury in 1986 was the real making of Rocastle. The Scot placed an emphasis on the vibrancy and energy of youth, and Rocky - operating on the right and working in tandem with a midfield axis of Steve Williams and Paul Davis - was the fulcrum of a side which took Division One by storm.

"Our strength was pace, and the element of surprise," said Graham, who led the north Londoners to first place around the midway point of the campaign. "Prior to Christmas, Martin Hayes, Perry Groves and Rocastle ripped through defences. Inevitably, though, they faded out after Christmas slightly."

That was certainly the case in the league, but in the Littlewoods Cup Rocastle netted an epoch-defining winner in the semi-final replay at White Hart Lane, taking Arsenal back to Wembley after a seven-year absence. In the dying minutes and with the scores level at 1-1, a speculative shot from Ian Allinson broke for Rocastle, whose shot squirmed under Tottenham goalkeeper Ray Clemence. Rocky's unbridled joy, matched by the thousands of jubliant Arsenal fans in the away end, heralded the Gunners' rebirth, which culminated in final victory over Kenny Dalglish’s Liverpool.

Over the next two years, some of Graham’s young guns – including Hayes and Quinn – failed to maintain their early momentum. But not Rocastle, who, along with Davis and converted full-back Mickey Thomas, became tougher and more obdurate, winning league titles in 1989 and 1991. Built like a middleweight boxer, Rocky was certainly no shrinking violet on the pitch; as Tony Adams later commented: “David was more than capable of putting his foot in when needed... he was a massively strong player, with thighs like tree trunks.”

Watch any of Arsenal’s legendary tear-ups of that era and Rocky is usually at the forefront. At Old Trafford in February 1987, he was sent off for retaliating to Norman Whiteside’s overly robust approach. “Not many players came back at me like he did,” Whiteside reflected several years later, “but David had no problems letting me know that he wasn’t to be messed around.”

In 1989, with a miked–up David Elleray struggling to maintain discipline at The Den as Arsenal faced Millwall, Rocastle was audibly heard questioning – fairly pointedly – several of the referee's decisions. And at Ferguson’s Manchester United in October 1991, Rocky found himself in the midst of the brawl which resulted in Arsenal being deducted two points. He later told Amy Lawrence in Proud To Say That Name: “We went in there and we stuck up for each other. At Arsenal we never, ever started any brawls – we just finished them.”

While not a prolific goal-getter, some of the midfielder's net-busters remain the most memorable of that era. There was his sublime finish at Anfield in a Littlewoods Cup clash in autumn 1988, when he controlled the ball and smashed it past Mike Hooper in one deft movement; the impudent lob at Villa Park in an away win a few weeks later; and a magnificent jinking run and finish against Middlesbrough during the title-winning campaign of 1988/89.

Rocastle told Shoot readers that he possessed an uncanny ability to “twist my torso the opposite way to my legs... it fools defenders”. The best illustration of that was his slaloming run through the Manchester United midfield and wonderful chip over Peter Schmeichel at Old Trafford during the 1991/92 season.

Rocastle came back strongly that year after two injury-hit campaigns, helping new signing Ian Wright to win the Supporters' Player of the Year award. Still only 25, he looked set to flourish at Arsenal for the rest of the decade, but George Graham decided to sell him to champions Leeds that summer.

There's still plenty of conjecture over the reasons for this. Graham hinted at a long-term weakness in Rocastle’s knee, although the player vehemently denied such claims. But with Rocky gone, Graham’s Arsenal swiftly lost their mojo. “I came back for pre-season training that summer, and life just wasn’t as much fun without David there anymore,” explained team-mate Perry Groves.

The final eight years of Rocastle’s career were a meandering tale of underachievement at Leeds, Manchester City, Chelsea, Hull and Norwich, before a brief move to Malaysia. Rocastle retired at just 32, with plans to embark on a coaching career. Sadly, the onset of non-Hodgkins lymphoma prevented him from achieving his goal, and he died on March 31, 2001.

Arsenal fans - and several of his former Gunners team-mates including Keown, Tony Adams and David Seaman – immediately paid homage to him at Highbury before a north London derby, and the “Rocky, Rocky, Rocky, Rocky, Rocastle” chant is still regularly sung at Arsenal matches home and away.

Under Graham, Rocastle’s rise to prominence and legendary goal at White Hart Lane marked the beginning of a golden era at Highbury. In a team laden with homegrown starlets and blue-collar buys from lower-division clubs, his skill, speed and “all for one” mentality illuminated the Gunners’ play during the late 1980s and early 1990s. Rocky – truly one of our own – will forever remain one of Arsenal’s favourite sons.