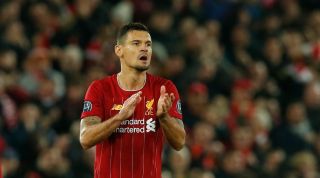 Arsenal and Tottenham Hotspur are among four London clubs interested in signing Dejan Lovren this summer, according to TEAMtalk.

Liverpool manager, Jurgen Klopp, has told Lovren he is free to leave Anfield this summer with the defender now four choice for a place at centre-back.

Joe Gomez and Virgil van Dijk are Klopp's preferred partnership, with Joel Matip set to remain as backup. If Lovren leaves then the Reds will sign a replacement.

The availability of the Croatia international has alerted a host of sides from the capital, with Crystal Palace and West Ham United also keen on the 30-year-old.

Lovren is under contract at Liverpool until 2021, but will be allowed to leave a year early by Klopp due to his outstanding service to the club.

The Croatian joined the Merseyside team from Southampton in 2014, but has become an increasingly peripheral figure in recent times.

This season Lovren has made just 14 appearances in all competitions, with the likes of Fabinho and Jordan Henderson even acting as competition to him for a place in central defence.

The best right-back in the world? How Trent Alexander-Arnold is reinventing the full-back