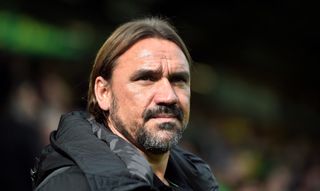 Daniel Farke has challenged Norwich to produce another “magic night” at Carrow Road as they aim to get the better of Manchester United on Sunday.

The Canaries turned in a memorable display to beat Premier League champions Manchester City 3-2 on September 14 – but then lost their next three matches.

However, following the international break, Farke’s squad, with injury problems relenting, battled to a goalless draw at Bournemouth.

Farke knows whatever the form of United, who are just three points ahead in the table, it will take something special again for the Canaries to upset the odds once more.

“We created a magic night against Manchester City. We can’t take it as a given to repeat that on a weekly basis, but we are trying to be outstanding with our performances,” the German coach said.

“If someone makes a successful tackle, the whole stadium has to be buzzing. We need that mood or we have no chance.”

Farke told a press conference: “It is always a great day to play still one of the best clubs in the world. We are respectful of United.

“We know it is a huge task for us, so it is an exciting day for everyone involved at Carrow Road. We are the underdog in every game, but it’s always a chance to get another point or three.

“We pay attention to who we play and have to adapt to each opponent. We don’t want to just enjoy the game. We want to be competitive and try everything to get a good result.”

Norwich had conceded 21 goals before finally recording a clean sheet at Bournemouth. However, the Canaries have now also scored just once in the past four matches.

Farke knows it remains very much a balancing act for the promoted club.

“Before Bournemouth the topic was we had to stop conceding goals,” he said. “We create many chances and have scored many goals, but it’s not easy at this level.

“It’s not like we can score nearly 100 goals like last season, but I am not concerned about our offensive play.

“It is about finding a good balance between being solid in defence and providing a threat in the offence.”

Norwich have revealed tributes will be paid on Sunday to former captain Duncan Forbes, who died aged 78 after a lengthy battle with Alzheimer’s disease.

A period of silence will take place ahead of kick-off, while both teams will also wear black armbands as a mark of respect to the centre-half, who made 357 appearances for the Canaries.

Forbes – who helped Norwich win promotion to the top flight for the first time in 1972 and later captained the side in two League Cup finals – will also appear on the front cover of the programme.