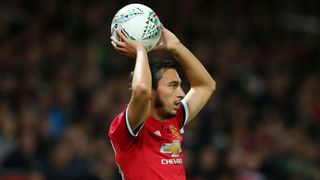 Manchester United full-back Matteo Darmian wants to leave the club but has not been the subject of bids which are anywhere close to being accepted, according to manager Jose Mourinho.

Darmian joined United from Torino in 2015 and enjoyed a solid debut campaign, but he has been a peripheral figure under Mourinho, making only eight Premier League appearances last season.

Juventus are among the clubs said to be interested in the Italy international, with speculation suggesting approaches have been made by the Serie A champions, while Inter have also been linked with a bid.

But Mourinho, who gave Darmian the captain's armband in Thursday's International Champions Cup clash with AC Milan for sentimental reasons, insists United have not received any offers which have been remotely good enough.

When asked why Darmian was skipper for the match, which United won 9-8 on penalties after a 1-1 draw, Mourinho said: "Because he is a fantastic guy in my two years and with Mr. [Louis] Van Gaal before me.

"He is the kind of guy who is always ready to give what he has, he grew up in AC Milan and to play against his childhood club and be captain in a friendly has a nice meaning.

"Matteo wants to leave and I think when a player wants to leave, if the right offer arrives you have to try to be human and let the player follow his instinct but not at any price. And, until now, the offers we got for Matteo are not even close to being accepted."

Mourinho admits it could be useful to keep Darmian around as he stands to have selection problems at right-back at the start of the season.

Injuries to Antonio Valencia and new signing Diogo Dalot mean Ashley Young and Victor Lindelof, who are on holiday following their World Cup exploits, could be rushed back to full fitness for the Premier League opener against Leicester City on August 10.

"Valencia is injured, you are right," Mourinho said. "And he will be injured for the beginning of the Premier League.

"Diogo Dalot is also in a recovering phase, he will not be ready for beginning of Premier League.

"Ashley Young is a possibility to play right-back but is on holiday. I don't know if he fancies to be back for that and put himself to be available for the team or stay on holiday.

"I will send people to Manchester to train with Victor, it makes no sense for him to come to the United States.

"So, if Matteo leaves he leaves because the right offer arrives and if he stays, yes you are right, he can be important for us."