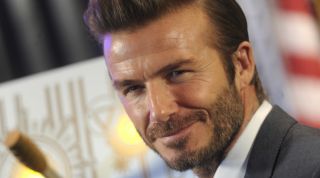 In order to fit his role as a grumpy knight, the former Manchester United and Real Madrid midfielder has had his iconic face and hair messed around thanks to some excellent makeup.

In the photo uploaded to his Instagram page, Beckham has a very badly scarred face, bright yellow teeth and obvious hair loss.

We'll be frank – it's bloody terrifying.

Could he be following the footsteps of former United team-mate Eric Cantona into the world of acting?

"I'm very aware that many sportsmen and other celebrities have turned their hand to acting and failed," he told The Times.

"I know that it's a tough profession, where you need a huge amount of skill and discipline, and I wouldn't want to push myself forward too soon without learning more about it and doing a lot more practice.

"But what I've done so far, I've loved. I can deal with most things. I'm a well-known person, so I've got used to criticism."

Beckham and director Ritchie are supposedly close pals, with Beckham also making a cameo appearance in his film The Man From U.N.C.L.E.