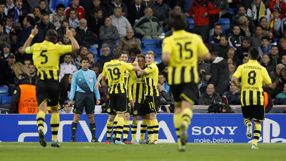 Dortmund, sparkling against Real, need only draw at Ajax later this month to reach the last 16, which would make a game circled as a potential winner-takes-all purely academic.

Superb again for much of the match against nine-times European champions Real after beating them 2-1 in Dortmund last month, the Germans can be excused for having one eye on the knockout stage from their perch at the top of Group D.

Having grabbed four points from a possible six against Real, coach Jurgen Klopp had every right to be beaming after his side made it eight points from four games, one point ahead of Real.

"We would have been quite happy to seal qualification with this game," he told reporters. "But we won our direct comparison with Real and we were not counting on that at the start.

"We earned our point in Madrid."

It was only thanks to Mesut Ozil's 89th minute free-kick that the hosts salvaged a point to avoid only their second home defeat to a German team after Bayern Munich.

A young Dortmund team, who have won back-to-back Bundesliga titles, twice took the lead through Marco Reus and Mario Goetze, demonstrating their ambitious nature in the competition.

Fifth in the Bundesliga this season after an erratic start and with Bayern dominating, Dortmund are throwing their weight behind their European push.

"It is not understood that you take Real in their own stadium to the brink of a defeat. We have drawn away against two of the world's best teams," said Klopp.

With Ajax awaiting on November 21, Dortmund, who won their only Champions League trophy in 1997, have qualification firmly in their own hands.