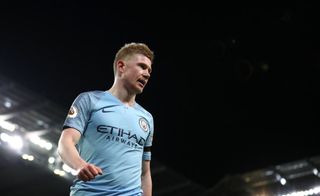 Kevin De Bruyne has admitted he may not get back to his best this season as he aims to lift Manchester City’s quadruple bid.

De Bruyne opened the scoring in City’s 2-0 win over Cardiff on Wednesday and played the full 90 minutes to complete his latest comeback in a season ruined by injury.

His sixth-minute finish from a tight angle offered reminders of De Bruyne’s sparkling form last season, but he later admitted it was a mis-hit cross and that it was unrealistic for him to rediscover his best form in the final weeks of the campaign.

“To be fair I don’t think I’m going to be like last year,” the 27-year-old said. “I’m not setting a goal for myself anymore.

“It’s been hard in the end because I have had to come back four times now in the whole season.

“I try to be at the best level possible but I’m just trying to help the team win some titles. If I can help with that I’ll be happy.”

De Bruyne has suffered two significant knee injuries this season and was sidelined just before the international break with a hamstring problem.

The goal now is to stay fit for the final six weeks of the campaign as City continue to compete on three fronts, locked in a close title race with Liverpool while also in the quarter-finals of the Champions League and semi-finals of the FA Cup.

Wednesday’s match was De Bruyne’s 25th appearance of the season, and his first full 90 minutes since February 27, a far cry from last campaign when he was one of the first names on Pep Guardiola’s team-sheet.

“Whatever happens, happens for me this year,” the Belgian added. “I want to do what I can and play at my best level but I won’t compare myself to last year when I played 70 games and was on such a roll.

“I’ve had to fight back, mentally, and it’s been tough because you can be injured once or twice but to be injured four times is hard work, I’m just happy to be back playing football.”

De Bruyne was joined in City’s midfield on Wednesday night by Phil Foden, who made his long-awaited first Premier League start and was unlucky not to score as the 18-year-old went close three times in the second half, including a shot which struck a post.

Much has been made of Foden’s struggle to break into City’s star-studded squad as other teenagers look abroad for playing time, but De Bruyne – who was a regular for Genk at the same age – said each player must take his own path.

“You can’t compare what happens with anybody else in their career,” he said. “He’s happy here, doing really well and he plays a lot of minutes for his age.

“To play here, in this team, or in any top team in England, where you have 20 star players who are all top internationals who have played five to 10 years for their countries and for big teams and have the minutes he has, is incredible.”

“I told the England guys a week ago that you should win the Euros,” he said. “I think they are favourites, with France.

“I see the guys already established, and those coming up, so the future looks really good.

“Will they win it? I don’t know, because only one team can win it but you have a chance to do well in the next 10 years.”