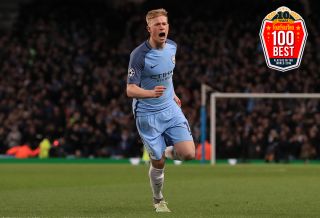 But the Belgian's season was disrupted by a knee ligament injury that meant he missed all of Man City’s February and March fixtures, during which the team suffered league losses to Leicester, Spurs, Liverpool and Manchester United.

Fit again in 2016/17, the former Chelsea man has posted two goals and seven assists in 13 league games, as the Blues look to win a third Premier League crown.

De Bruyne is ranked eighth in this year’s FFT100, one place above Sergio Aguero, while David Silva is also among the top 10 Premier League men for 2016.

Manchester United can also boast three members in the Premier League top 10, with Paul Pogba and Zlatan Ibrahimovic placed at 14 and 18 in the overall list, while David de Gea is at 31 – only Manuel Neuer is rated a better gloveman.

Chelsea’s poor defence of their Premier League title last term means that just four of their squad are selected this year. Eden Hazard is ranked the seventh best player in the Premier League, but a drop of eight places from 2015 takes him out of the overall top 20.

N’Golo Kante’s title-winning performances for unfancied Leicester City – combined with his impressive start to life as a Chelsea player in 2016/17 – see the French enforcer make his FFT100 debut straight into the top 30.

Sanchez, who in June helped Chile secure a second Copa America triumph in as many years, is rated the fourth-best player in the English top flight, while 19 league assists and six goals for Ozil see the German schemer break back into the top 20 of the main list.